The #asktsipras raised more than 30 thousand tweets in less than an hour, launching the event 1st in popularity in Greece and 3rd worldwide. 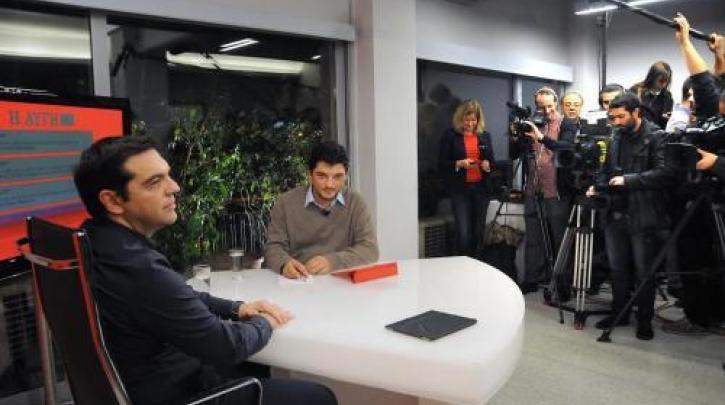 On Wednesday avgi.gr held an open online discussion of Alexis Tsipras with citizens - users of social networks. The #asktsipras raised more than 30 thousand tweets in less than an hour, launching the event 1st in popularity in Greece and 3rd worldwide.

"Our strenght it`s not the media but the confidence of the people", said Alexis Tsipras during his "alternative" interview.

Foreign reporters and tv crews from around the world were found yesterday at the offices of Koumoundourou to watch the interview - dialogue of Alexis Tsipras with citizens, organized by avgi.gr.

Among others, the president of SYRIZA pledged that as regards taxation will provide a robust fiscal framework and SYRIZA will address the over-taxation and taxed wealth.

"SYRIZA has the political will to clash with the big interests ," added Alexis Tsipras.

Asked about corruption, Alexis Tsipras stressed that the most important thing is to stop the "party" contractors and "national suppliers" are pulling off all these years against the Greek people.

"All privatizations made ​​by ΤΑΙΠΕΔ will be reviewed", underlined Alexis Tsipras, and added that the strategic services such as water and electricity they can not be in private hands.

"It is not unilateral action to want to reinstall the country on its feet ," he said to a question on economic policy and on possible exit of Greece from the NATO considered that "it would be wrong to open fronts with our partners ."