The End of Democracy in Turkey

#FreeHDPnow: The End of Democracy in Turkey 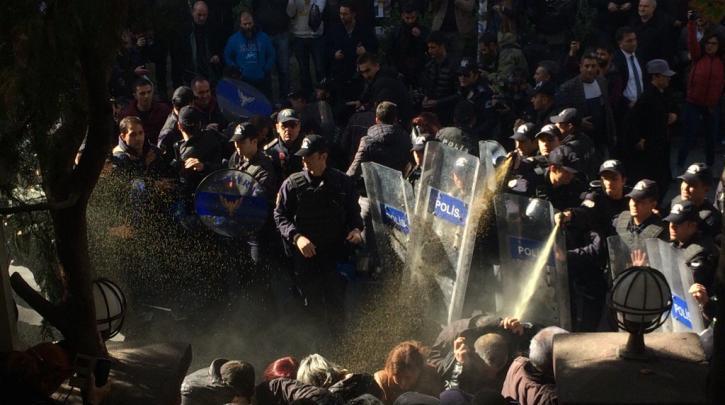 Last night the purge of President Erdogan against our party has reached another peak: our Co-Chairs Selahattin Demirtas and Figen Yüksekdag, along with 11 further Members of Parliament of our party have been detained across Turkey last night. More arrests are to be expected. The goal of these measures is to shut down the third largest party in parliament. This is a dark day not only for our party but for all of Turkey and the region as it means the end of democracy in Turkey.

Ever since our party reached a historic victory during the national elections of June 7, 2015 where we succeeded to enter parliament despite the undemocratic 10% threshold, President Erdogan has singled out our party as the main target of his authoritarian policies. The reason is our principled opposition against his goal to introduce a presidential system in Turkey. Our seats in parliament are the biggest obstacles to the necessary constitutional changes. Thus, he simply ordered new elections in November 2015. Despite a series of violent assaults by “unknown perpetrators” on our party members and infrastructure, we managed once again to surpass the threshold on November 5, 2015 and won 59 seats in Parliament. Since he could not re-order elections another time, President Erdogan initiated the lifting of the immunity of our MPs in May 2016. As he could not prevent us from entering Parliament, he now orders us into prison.

Thousands of members, executives, elected mayors and city council members affiliated with the HDP and/or our sister party DBP have already been sent to prison on groundless charges since our electoral victory in June 2015. Yet the coup attempt on July 15, 2016 and the subsequent declaration of a state of emergency has been the welcome opportunity for President Erdogan to eliminate all opposition. There is no freedom of expression and no freedom of press, no academic freedom, and no fair and independent judicial system any more. With government decrees gaining the power of law, over 170 media outlets critical of Erdogan have been banned. More than 130 journalists are in prison, including world-renowned authors and intellectuals. Most recently, two Kurdish news agencies and several Kurdish dailies were closed down and the chief-editor, columnists and journalists of the daily Cumhuriyet have been detained. More than 80,000 people have been detained since July 15, and about half of them are in prison now.

On November 30, Ms. Gülten Kisanak and Mr. Firat Anli, elected co-mayors of Diyarbakir from our party, were arrested and sent to prison. A district governor from Ankara was appointed to run the municipality. With this, the number of Kurdish municipalities run by bureaucrats appointed by the central government increased to 28. About 30 democratically elected Kurdish mayors are now in prison, and about 70 of them were dismissed by the central government.

We strongly condemn the detainment of our Co-Chairs Selahattin Demirtas and Figen Yüksekdag,  as well our Members of Parliament Nihat Akdogan, Nursel Aydogan,  Idris Baluken, Leyla Birlik, Ferhat Encü, Selma Irmak, Sirri Süreyya Önder, Ziya Pir, Imam Tascier, Gülser Yildirim, Abdullah Zeydan and demand their immediate release. The manufactured charges against them and all other party members must be dropped.

History has shown over and over again that any power based on brute force is outlived by the struggle for justice and freedom. We will not surrender to these dictatorial policies and call upon our friends around the world to stand in solidarity in our struggle to prevent Erdogan to steer the country into a civil war and further despotism.