Another Attack of the Government on Democracy

In the afternoon of Tuesday June 11, the Greek government, with a surprising move, announced the closure of the Greek Television and Radio corporation (ERT) and the firing of all its employees. 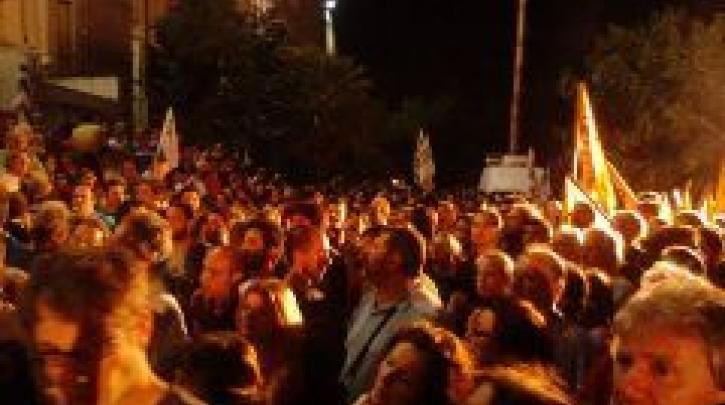 The decision would be effective practically immediately (i.e. from 23.00 of the same day) and according to the plans a new Public Television will be founded (with half the personnel) by September. Since the decision has been taken under a Special Legislative Act normally reserved for emergency situations, the Parliament is being bypassed at least for a few months.

To support the closure, the government argued that ERT was a highly expensive and corrupted company where all governments (including the current one) had been hiring people through clientelistic mechanisms; a company that couldn’t be reformed. Behind those arguments hides the government’s decision to make an impressive move after the failure of the state gas company sell-off, last week; a move that would also help them achieve the quota of 2.000 layoffs from the public sector in 2013, as demanded by the memorandum they have signed with the troika.

The government’s announcement created a widespread reaction all over the country. Apart from the neonazist Golden Dawn, all other parties (including PASOK and DIMAR, that are part of the government coalition) asked for the decision to be revoked. SYRIZA and other parties have submitted a law proposal in the parliament to revoke the government’s Special Legislative Act. Alexis Tsipras has also visited the President of Greece (a rather symbolic position without many authorities) asking him to refuse to cosign the Special Act, since it is obvious that the government doesn’t have the majority in the parliament on the issue; he refused.

What’s more important though is that the decision has mobilised people all over Greece to demonstrate in front of ERT headquarters in Athens and other cities. As the government was gradually cutting the TV signal from all the stations, the journalists continued transmitting their programme via internet streaming, with the support of internet communities, of the radio and TV station belonging to SYRIZA and KKE, and since yesterday with the help of the European Broadcasting Union EBU as well. During the first night tens of thousands of people had gathered, while the personnel has organized concerts by the ERT orchestras and other artists. Finally a general strike has been declared for Thursday June 13, with the main demonstration being organized outside the central ERT building in Athens.

It is more and more obvious that the ERT case doesn’t have to do with the closure of a state company. It is being perceived by a great part of the Greek population as another attack of the government against democracy. An effort to leave only corporate media in the field of information and to create a culture that - no matter how important a decision is - the people’s representatives in the parliament don’t have a say on it. Everybody now understands that this is only the beginning: despite what the prime minister Samaras was promising before last year’s elections (that no layoffs would happen in the public sector, just restructuring), useful institutions - like hospitals and universities - are to be abolished and tens of thousands of layoffs are already underway, in a country of 30% unemployment…

6 National Radio stations (including the only classical music one, a world music one, and one focusing on immigrants), 3 Radio Stations for Northern Greece, 1 Radio Station transmitting all over the world (“Voice of Greece”)

19 regional radio stations all over the country

2 orchestras (symphonic and modern), and a choir

The ERT digital archive, with valuable multimedia historical material since the beginning of radio and TV broadcasts in Greece.

ERT is being funded by a special annual fee of 51 euros per electricity supply (i.e. practically per home or workplace) which adds up to 290 million Euros. However not all of that money ends up to ERT: 75 millions goes to the Electricity Market Regulator Company and more than 50 million to the Greek State, either directly or through VAT. In 2012 ERT had a surplus of 41 million.

Find here the link to the EBU petition