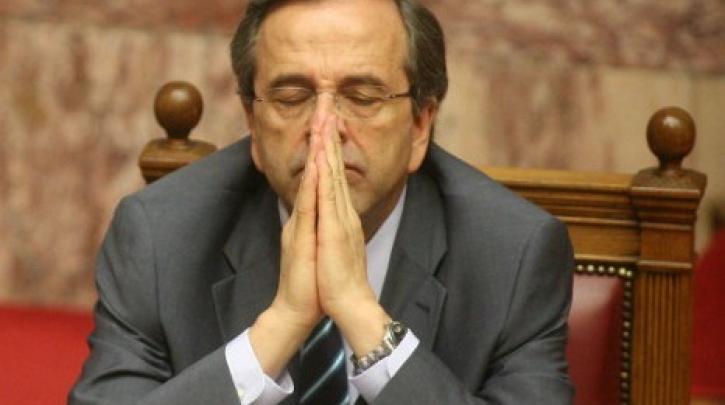 Greek PM Antonis Samaras meets with UN Secretary General Ban Ki-moon Friday Aug 9. Join our 4:30-6pm protest against the Greek government's brutal austerity, repression, and pandering to neo-Nazi Golden Dawn. 42nd St. and First Ave., Manhattan (Peace Park, across from the UN) Sponsored by AKNY-Greece Solidarity Movement and SYRIZA-NY. JOIN US AND INVITE YOUR FRIENDS! (If you aren't in New York, tell your friends who are.)

We are here to protest the U.S. visit of Greek Prime Minister Antonis Samaras. We want President Obama, other American and UN officials, the media and the public to know what the Greek people know unfortunately all too well.

Samaras’ government has imposed a harsh economic austerity program that is destroying the living conditions and democratic rights of millions of Greeks. It is slashing people’s wages and pensions, laying off thousands of teachers, healthcare workers and civil servants, and destroying Greece’s meager welfare state in order to keep servicing Greece’s debt. Many people cannot make ends meet; the UN reports that more than 600,000 Greek children live under the poverty line.

The Samaras government, the IMF, and European officials who have pushed this failed and increasingly discredited program onto Greece put the interests of banks and the capitalist 1% ahead of the basic needs of the Greek population. Unemployment is close to 28% and nearly 60% for young people; Greece’s talented and educated young people are leaving the country by the thousands. Growing numbers of people can no longer afford to use hospitals; poverty, hunger, homelessness and despair are growing rapidly. Suicide rates are skyrocketing.

Given its destructive and unpopular policies, it is not surprising that the Samaras government has become increasingly authoritarian and repressive. It has moved the country toward the extreme right, legitimizing the neo-Nazi, anti-immigrant, anti-Semitic and anti-gay Golden Dawn Party by pandering to its anti-immigrant slogans. Amnesty International, Human Rights Watch and the international media have documented the fact that Samaras’ conservative party, the police, and the judiciary have all turned a blind eye to the rise and escalation of criminal acts of Golden Dawn, which has grown rapidly as a result of the social havoc that austerity policies are causing.

We are witnessing the evisceration of Greek democracy: extreme police violence against protesters, holding camps for immigrants, torture of prisoners, arrests of journalists. In a witch hunt denounced by public health officials everywhere, the Greek government has reinstated a measure that allows police to detain people suspected of being HIV positive and force them to be tested. Golden Dawn refers to Jews as “vermin,” and a Golden Dawn member of parliament reads aloud from the anti-Semitic forgery “The Protocols of the Elders of Zion” with no protest from the government.

As bailouts for the rich and budget cuts for the rest are now becoming adopted in other European countries, the U.S. and beyond, it has become clear that what is happening in Greece affects us all. For this reason, we are here to express solidarity to the Greek people and to affirm that their struggle against Samaras’ brutal austerity policies is also our struggle.