Yesterday, Thursday October the 15th, the convoys of the Euromarchas arrived in Brussels. The Party of the Europe Left (EL), with Natassa Theodorakopoulou, member of its Executive, went to welcome/greet the Southwest column which left Cadiz on September 30th and toured Spain and France holding conferences, meetings, and demonstrations in all the stops of its tour. 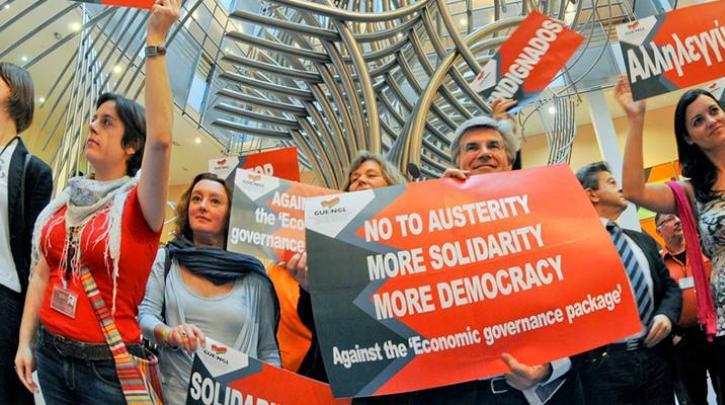 The initial intention was to have Gibraltar as starting point so as to denounce one of European tax havens, but they did not let them enter.

The Southwest convoy crossed France to arrive yesterday early in the morning in the Belgian capital. They were the first to enter Brussels and those who at 11 a.m. walked at the end of the march, in company of Belgian and German partners, among others. They headed towards the headquarters of the European Commission with the intention of preventing the access of the presidents and heads of State to the EU Summit meeting which began yesterday.

When the march came to the meeting point, in one of the routes of access to the Commission surrounded by the police, it was joined by Belgian activists and trade unions from Belgium, Germany, Portugal, Italy and MEPs from member-parties of the European Left.

In a festive and defiant atmosphere, speeches denouncing the TTIP and European policies of austerity were combined with musical performances lifting the spirits in an event that, under rain and cold, lasted until almost 5 in the afternoon.

At that time the convoy from Greece arrived in Brussels and all gathered for the night at a cultural centre that welcomes participants in the marches. A discussion on TTIP and human rights took place.

In total, more than 600 demonstrators gathered at different points close to the European Commission with the intention of peacefully preventing the arrival of EU leaders to the meeting of the European Summit, resulting in over 120 detained protesters that hours later were released in what ended as an administrative detention.

The activities of these three days of actions, organized with the active participation of 10 countries and over 300 organizations, will continue throughout Friday the 16th with various conferences devoted to discuss debt, immigration as well as climate change and agriculture. A political meeting to debate the organisation and strategy to be followed will be held at 7 in the afternoon.