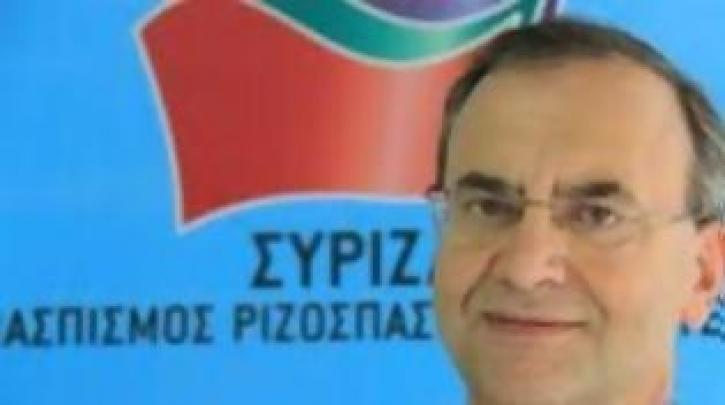 Facebook Twitter
Dear Dimitris
We learned on Sunday evening of the brutal assassination attempt on you by Chrysi Avgi thugs.
We congratulate you on your bravery and presence of mind when under attack.  We know from experience how badly even verbal aggression can shake one up.
We trust you are recovered and that you and your family have people around you to keep up your strength.
Please accept this message of solidarity from the Greece Solidarity Campaign (UK).
I feel sure the broad-based, union-established campaign, Unite Against Fascism (UK) would also wish to be associated with these comments and I am copying them in.
We see our role as standing beside you against the forces of fascist evil.  We will be protesting outside the Greek Embassy in London in January.  Do let us know if there are other steps we can take.
We have been here before: the rise of Chrysi Avgi is the direct result of the extreme austerity measures imposed by the Troika and implemented by the Greek Coalition Government.
We know that poverty and deprivation can lead the exploitation of desperate people by vicious forces who put the blame for the crisis on immigrants, turning them into scapegoats, just as Hitler blamed the Jews for everything.
This process led to Hitler’s extermination camps, destruction of 2,000 Greek villages, massacres and Nazi brutality of World War 2 – particularly in Greece.
We have a special responsibility because we also know that British governments, at the end of the war, let many fascist collaborators escape justice, with dreadful consequences which we had hoped were ended after the overthrow of the Junta in 1975.
We have seen Chrysi Avgi squads attacking immigrants, market stall holders and artists at the Chitrion Theatre - with the complacency or complicity of the Greek police which seems to spare no cost or effort on tear gas against trade union and popular demonstrations.
We have also observed the opposition from Syriza and left activists, the message from immigrants demanding justice to Minister of Public Order Dendias on 24 August, and the demonstrations on 28 October by thousands of teachers and students around Greece demanding: “Neither in the parliament not anywhere, Nazis out of our neighbourhoods”.
Along with millions of progressive people throughout Europe we are in association with that resistance.
We have to stop fascism in its tracks wherever it manifests itself, before it takes hold and spreads.
Please tell us if there is anything specific we can do.
We hope, in spite of these terrible circumstances, you and your loved ones can achieve some peace and rest over the Christmas period.
Be sure that millions are with you.
Aλληλεγγύη και φιλία - solidarity and friendship
For the Greece Solidarity Campaign
Facebook Twitter
tags: ΣΥΡΙΖΑ, Χρυσή Αυγή