Since the weekend, the Greek police have rounded up around 6500 immigrants in Athens. About 1500 have been found to be without documents and are currently imprisoned awaiting deportation, in overcrowded detention centres where conditions are ‘dire’. Βy Yannis Hamilakis 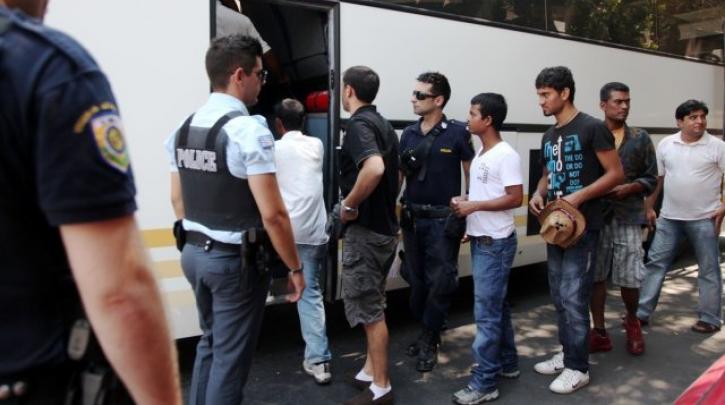 Facebook Twitter
More than three-quarters of the people targeted by the police are completely innocent. But most of the media (even the Guardian) have described it as an operation against lathrometanastes or ‘illegal’ immigrants. They also seem to have reproduced verbatim police reports which claim that indiscriminately pouncing on immigrants is a way to crack down on all sorts of criminal behaviour, from drug use and prostitution to breaches of health regulations in shops.
The official codename for the operation is ‘Xenios Zeus’. The name of Zeus, usually invoked only by hoteliers and the Greek tourist board, has struck many people as an odd choice, especially with the epithet xenios, which denotes his role as the god of hospitality, the protector of foreigners. Some critics thought it outrageous, offensive sarcasm, a direct and blatant provocation. Others thought it unintentionally ironic. But ancient mythology, classical figures and monuments have often been deployed by authoritarian regimes to justify or mask repressive policies. During the Greek Civil War (1946-49) the prison-island of Makronisos, used by the government for the ideological ‘rehabilitation’ of left-wing citizens and soldiers, was known as the New Parthenon.
Most of the immigrants rounded up this week came to Greece from Asia or Africa. Calling the operation ‘Xenios Zeus’ is an appeal to classical authority, part of an attempt to assert a perceived difference between ‘western civilisation’ and ‘oriental barbarity’ going all the way back to Ancient Greece. According to the public order minister, Nikos Dendias, ‘the country is being lost. Not since the coming of the Dorians, 4000 years ago, has the country seen an invasion of such scale… This is a bomb at the foundations of society and of the state.’ Never mind that there’s no archaeological evidence for the ‘coming of the Dorians’; never mind that 4000 years ago there was no Greece as such; never mind that ethnic labels such as ‘the Dorians’ are seriously questioned today by archaeologists and historians.
The rhetoric of ‘invasion’ echoes the language of neo-Nazi groups. A couple of months ago, in the run-up to the elections, another minister described immigrants as a ‘health bomb’. This was presumably an attempt to undercut the Golden Dawn, who asked Greeks to vote for them in June so that they could ‘clean up the dirt’. The far right makes extensive use of classical antiquity, staging ceremonies at archaeological sites such as Thermopylae. These are the same people who organise blood donations for ‘Greeks only’, and who make a big show of distributing food to the needy in Syntagma Square but ask for ID to make sure that no foreigner receives any.
It seems that the government wants to occupy the same rhetorical ground as the most extreme and openly xenophobic groups in Greek society. ‘The problem of immigration is perhaps even more serious than the financial one,’ Dendias has said, as another package of severe austerity measures is waiting around the corner.
reposted from Greek Left Review
Facebook Twitter
tags: immigrants