Immigrants living in Greece have been targeted in at least 300 violent attacks in the last three months, local anti-racism campaigners said Thursday, calling for better police protection against a surge in hate crimes. 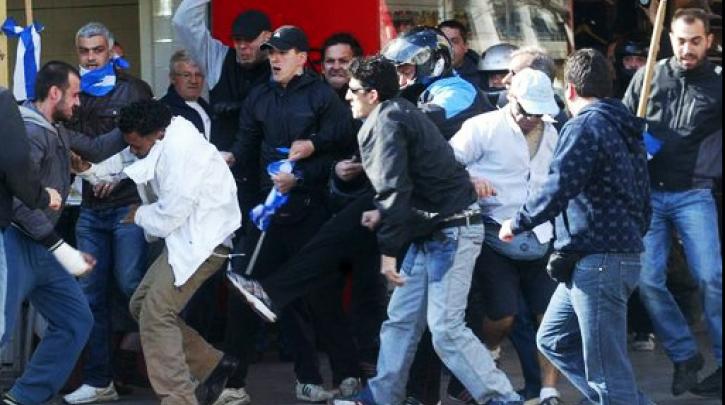 Facebook Twitter
Greece, which is suffering a fifth year of recession, is the European Union's busiest transit point for illegal immigration. In Athens, many immigrants live crammed in small apartments in squalid conditions in central neighborhoods that have seen a sharp rise in crime since the financial crisis began in late 2009.
Activists have linked the surge in attacks against immigrants to the political rise of the far-right Golden Dawn party, which uses aggressive rhetoric against immigrants and has been described by political opponents as neo-Nazi. Golden Dawn members are accused of being behind several of the attacks, though the party denies any role.
The anti-racism campaigners said five Indian and Pakistani immigrants were injured Tuesday when they were attacked by some 20 masked men in their homes in Menidi, 10 kilometers (six miles) north of Athens. One alleged victim, Indian immigrant Vije Kumar, had extensive cuts and bruises and said he was beaten with clubs and metal bars.
"It was 10 o'clock at night and I was sitting outside eating because it was really hot ... Suddenly about 20 men appeared, maybe more. They were all wearing hoods. They started hitting us," Kumar, a 40-year-old frame maker who has lived in Greece for 12 years, told the Associated Press.
"We didn't realize what was happening in the beginning. They really beat us badly. It was like they were trying to kill us."
Javied Aslam, who heads a Pakistani immigrant group in Greece, said the attackers forced their way into seven homes, assaulting occupants and smashing property.
"These are fascist gangs and someone has to stop them," Aslam said. "They smashed everything — TV sets, refrigerators, doors and windows. Four of the homes were inhabited by Pakistanis and the other three by Indians."
In a report issued last week, U.S.-based Human Rights Watch said it had documented recent gang attacks on dozens of immigrants living in Greece, including children and pregnant women, and also warned of a surge in xenophobic violence.
Greek police do not keep statistics on racially-motivated crimes, arguing that the motive for violent offenses is often unclear.
Aslam, whose organization is part of the Athens-based Campaign Against Racism, said anti-immigrant violence had surged before general elections were held on May 6 and June 17. The votes eventually led to the election of 18 members of parliament from Golden Dawn.
Since early April, and during the time the election campaigns were in full swing, Aslam said his and other groups had received 300 reports of assaults on immigrants.
"The number is probably higher," he said, alleging that attackers often said they were from Golden Dawn.
While denying any role in such attacks, the party has argued that the violence is far less significant than a surge in crime caused by illegal immigrants.
The Campaign Against Racism's Petros Constantinou said the new government should give priority to stopping violent street gangs who pick their targets by skin color. He also accused the police of often turning a blind eye to crimes against immigrants — an accusation the police have denied in the past.
By DEREK GATOPOULOS Associated Press
abc news
Facebook Twitter
tags: βία, μετανάστες, ρατσισμός