Speaking to the large gathering that ended the 2nd SYRIZA Youth Festival on Sunday 29 September, President Alexis Tsipras stressed, among other things: 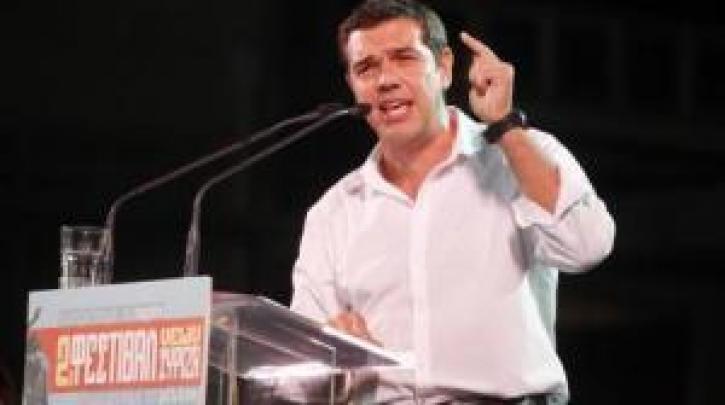 The murder of Pavlos Fyssas – the Pavlos of music and dreams, the Pavlos of hard work and poetry – was the straw that broke the camel’s back. It whipped up waves of outrage wherever people are fighting for light and life. And it frightened the ravens of death with their black T-shirts. The Pavlos of life and creation, of dreams and resistance, departed this life too early, but he died proud, because he loved people and could not tolerate those who hate people: the fascists. Pavlos’ murder will go down in history, together with the murders of Petroulas, Lambrakis and Temponeras. Because his blood became a river that drowned the neo-Nazi monstrosity. And now it is threatening to drown those who fed and nurtured it. Those who put it in our homes, through their television and newspapers, not as a monster but as a pet. […]

The outrage in Greece and abroad was what goaded the government, which until very recently was pretending not to understand and kept looking among the neo-Nazis for future collaborations. Be assured, Mr Samaras and his colleagues have not changed their minds. They were obliged to retreat.  And not only does this not concern us, we welcome and celebrate it. It is a great victory! A victory for democracy, a victory for the anti-fascist movement, a victory for democratic Europe.

In addition, Mr Tsipras denounced  statements by Mr. Antonis Samaras, the prime minister of the two-party government of New Democracy and PASOK, as follows:

Then, he called for the creation of a nationwide movement to overthrow the government.

If each individual group fights only for their own cause, everything is lost. And that’s the truth. Today, more than ever before, we must all join together. People employed in the public and private sector. Working people and unemployed. Pensioners living on 300 euros a month, and the young people in the ranks of the generalised unemployed. University graduates and proletarians delivering pizza and working in fast food outlets.  Teachers, pupils and parents. Together. We must join our voices together in a great sweeping river. A gigantic nationwide movement that will overthrow the policy of the Memoranda. This voice must be heard in Brussels, Berlin and Paris. This voice must be heard, above all by the poorest neighbourhoods of the European south. And it must send a message that the fight is a common one. That overthrow is in our hands…[…]

We can live and work without having to carry parasitic capital and its greed on our shoulders. We can choose the form of development that will meet our needs. That will create decent jobs, distribute the wealth produced more fairly, and respect the environment. We can restore free, public education for everyone at all levels. We can give back to our young people the right to hope and dream. We can spark a great change in Europe: the defeat of the devastating austerity policy.

In closing his remarks,the President of SYRIZA, amidst great applause, emphasised that Greece cannot no longer stand to be governed by those who have led her to disaster.

There are a great many of us. Every day we’re more and more. The people trust us, not because everybody has suddenly joined the Left, but because we’re not like the others: lying, self-serving hypocrites. Because we believe in politics not as a profession, but as a means of changing our own destiny and that of our country. Because we dream of a free country with social justice, democratic stability, prospects and authority. Because we have come from afar with roots in the ranks of EPON, among those who rise up, who are pursued, who are rebellious. Among the resolute champions of democracy in hard times. For this reason, don’t expect us to bend, even for a moment, as the poet said, We have a country. We have ideals. We have experience. And we are resolved to win.