Call to International Day of Solidarity to the Greek People

“The prosecutor said that the person responsible for ERT’s inventory now is the ‘brigadier general’ of the police forces.” 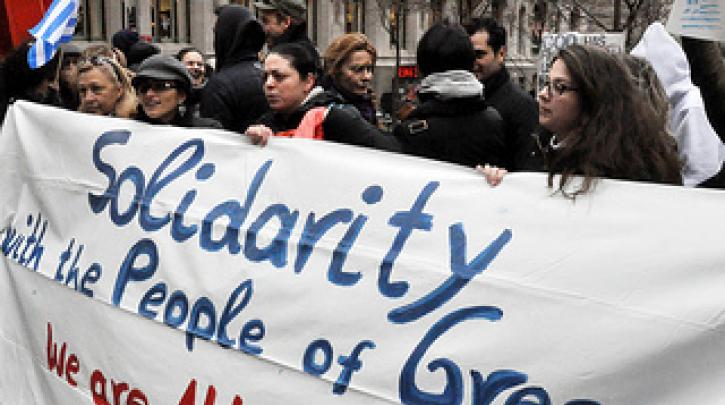 In 4.20 am, today, Thursday 9/11 police raided the building of ERT - the Greek broadcaster that its workers kept alive broadcasting for five months after its unconstitutional shutting down – in a culmination so far, of the “law and order” campaing by the Greek “state of exception” regime.

After the police house-raids in the communities of Chalkidiki, who resist gold-mining and the destruction of their land and forest, after the forced conscription orders against the striking teachers, transport and sea-port workers half a year ago, the government has unleashed a new assault on democracy, against the resistance of the Greek people.

Last week the social solidarity movement experienced for first time police raids in grassroot solidarity structures, among others in the Metropolitan Social Clinic of Ellinikon (Athens), and in the Without Middlemen Bazaar in Oraiokastro (Thessaloniki).

Today, in addition to the ERT raid, the government issued disciplinary orders against the university staff, who strike 9 weeks now defending their jobs and resisting the destruction of higher education institutions, forcing them temporarily out of work.

At the same time the delegitimised regime of the pro-Troika government, day after day, breaches and dismantles any constitutional and democratic procedure, in a peculiar “coup d’etat”. Such authoritative climaxing occurs while the Troika visits the country, in order to desing with the Greek government the next instalment of austerity measures.

Under these circumstances a rally outside the ERT buildings has been called for today (Thursday 7.11) at 4 pm.

There are also calls for mass mobilisations on Saturday 9.11, in combination with the International Day of Solidarity Against Gold-Mining in Chalkidiki and against the repression of social struggles by the Greek government.

“Police forces have just entered the studios of the Greek radio… It’s not for ERT alone. It’s not only for our jobs. But it is for Democracy itself… Don’t seek for legality… for the defence of Democracy, for holding each other’s hand, for our dignity and honour, for standing shoulder to shoulder to each other… because we met at the same street together, because we fought the same struggle… we ask you to come now at the headquarters’ of ERT… The voice of the Greek radio is silenced!”

the final words of the ERT anchorman

We call everyone to participate next Saturday 9 November in the International Day of Solidarity Against Gold-Mining in Chalkidiki and to organise actions of solidarity to ERT, University workers’ and social solidarity structures, against the  “coup d’etat” of the Troika regime.

For Real Democracy and Social Emancipation