Armed only with rubber gloves, greek cleaners fight the iron fist of austerity

A group of 30 Greek cleaners attended the first European Parliament plenary session in Strasbourg on 16 September, exactly one year after they were unexpectedly fired by the Greek Ministry of Finance. 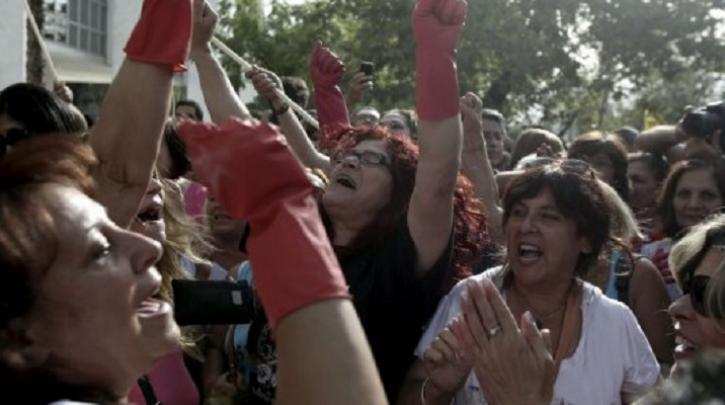 Laid-off finance ministry cleaning staff shout slogans outside the Supreme Court during a protest in Athens on Tuesday, 23 September 2014.

Wearing matching pink T-shirts, they raised their red-gloved fists to call for European solidarity in support of their struggle to win their jobs back.

“One year ago someone decided to ruin our lives. Someone decided that we are just numbers not human beings,” said Dimitra Manoli, one of the 30 cleaners invited to the Parliament by MEPs from the left-wing Greek party Syriza.

The 30 cleaners are among 595 workers –mostly women aged between 45 and 60 –who used to work for the Ministry of Finance and were laid off on 17 September 2013 and replaced by a private cleaning contractor.

Their wages ranged from €205 to €757 a month (net), according to their lawyer, Yannis Karouzos, and their layoffs were part of the public spending cuts imposed by the Troika of Greece’s international lenders (the European Union, the International Monetary Fund and European Central Bank).

Since then, these cleaners have been protesting daily outside of the ministry building, becoming a symbol of resistance against the EU’s austerity policies.

During the various protests, Greek riot police repeatedly attacked the cleaners, with many of them ending up in the hospital covered with bruises.

“We came to Strasbourg in order to make our issue known and to ask for help. Because in our country, in Greece, we only receive violence as a response to our struggle,” said Evaggelia Giannaki, a 45-year-old woman who was laid off after working at the ministry for 13 years.

“The biggest problem is that at our age and in the context of rampant unemployment we are completely unable to find new jobs.

“In my mid 40s I want to work and I am doomed to unemployment. Even the European Social Fund is mainly targeted to the young unemployed. What about us?”

“The cleaners give an exemplary struggle for dignity," statesKonstantina (also known as Konstandinka) Kuneva, the Bulgarian-born Greek MEP and founding member of the Union of Cleaners and Domestic Workers.

“Unfortunately, despite there being thousands of workers who have been hit by the Troika’s policies, not many of them manage to continue their struggle and resistance,” Kuneva added, urging MEPs and journalists to support the unions and to coordinate steps against precarious work and redundancies.

Against the public interest

Earlier this year a court ruling had ordered the Greek finance ministry to re-hire the 595 cleaning ladies as their layoffs were judged to be “contrary to the public interest.”

Instead, the Greek state appealed to the Supreme Court, whose verdict is due on 24 February 2015.

A leaked recommendation by the responsible Supreme Court judge Christoforos Kosmidis overturned the first ruling, suggesting that the permanent retrenchment of the cleaners is “the Greek state’s legal right to abolish existing jobs in the public sector and suspend civil servants when it is driven by reasons of public interest and rational criteria.”

Syriza MEP and European Parliament Vice President Dimitris Papadimoulis told journalists: “There is no verdict yet. This is an unlawful leakage.

“The cleaners will be present in the court and they will continue their struggle no matter what.”

Equal Times contacted government spokeswoman Sofia Voultepsi but she refused to comment on the case.

An international solidarity movement to support the Greek cleaners has blossomed in the last year with actions taking place across Europe on 20 September.

Eric Neuprez, who covers the cleaning sector for the Belgian trade union FTGB, told Equal Times: “What happened to these Greek women, who belong to the sensitive cleaning sector is typical of what happens in many countries.”

For example, Belgian cleaners at Schaarbeek train station in Brusselshave been on strike since 21 August to call on their employer, the subcontractor BM&S, to rehire the two trade union representatives and three long-term contract workers who were fired by the company.

They too organised a solidarity action for the Greek cleaners on 19 September.

Tony Hatbois, from CGT France, the country’s general confederation of labour, was also present in the European Parliament to offer financial and moral support from the French trade unions to the Greek cleaners.

And in the UK, the Trades Union Congress (TUC) supported a demonstration organised by the Greece Solidarity Campaign outside the Hellenic Centre in London.