The alliance of the European south: Alexis Tsipras in El País

This is a translation of an op-ed by Syriza leader Alexis Tsipras in El País, dated 22nd May. 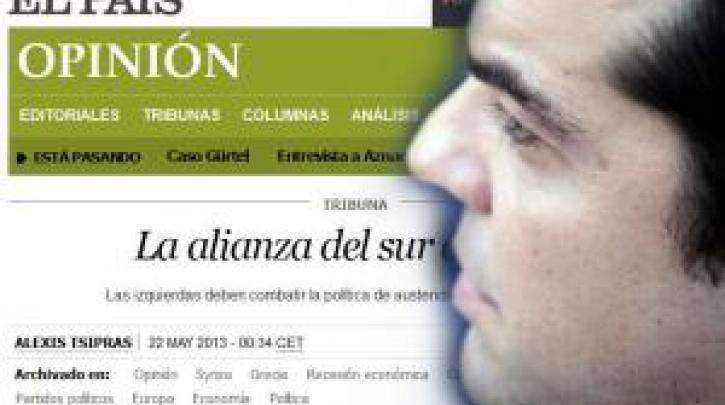 This month marks three years of systematic application of strict fiscal austerity measures in Greece. In these three years, national income has gone down 20%, a reduction without precedent in the economic history of contemporary Greece -with the exception of the Second World War – whilst even the most optimistic calculations predict the continuation of this deep recession still for a long time to come.

The unemployment rate has gone above 27% of the labour force. Two out of three young people try -unsuccessfully- to find a job, and two out of three people in unemployment are long term unemployed. The scars generated by the huge Greek recession on the social body cannot be easily cured. Even if the crisis were to end miraculously today, the Greek economy would need time to recover from the losses that the recession has caused to the productive fabric of the country, the level and quality of public services, health, education, social protection and, above all, society’s most significant asset: the knowledge and talent of a new generation that is now emigrating.

Not only has fiscal austerity caused an economic disaster on a scale equivalent to that of a war, but at the same time, it has failed in its stated objectives: the stabilisation of public debt and the re-establishment of the confidence of international markets in the Greek economy. The debt as a percentage of Gross Domestic Product (GDP) has grown from 130% to 175% of GDP these last years and remains unsustainable. The cost of funding the State short term and of loans for small and medium enterprises is many times greater than that of the countries of the north of Europe. The complete failure of the austerity policies applied, even in terms of their declared objectives, does not surprise those who are aware of historical experience. As the interwar Great Depression showed, aggressive policies of macroeconomic tightening in an international context of economic recession are a catastrophic doctrine: they activate a spiral of recession, they exacerbate the problem of public debt, and they create a grave danger of destabilisation of the common currency, of democracy, of Europe.

Despite its peculiarities, the Greek experience is an example of a broader problem: the efforts realised by a dogmatic political and economic elite that wants to overcome the endogenous institutional and economic imbalances of the Economic and Monetary Union with the unilateral reduction of wages and living standards of the countries of the south of Europe. Spain, Portugal, Ireland and Italy are, to a certain degree, living under austerity policies equivalent to those of Greece, with similar disastrous results, as those six million unemployed Spaniards and 350,000 Spanish families who have lost their homes can testify. No successful monetary union in modern economic history has attempted, and failed, to correct endogenous macroeconomic imbalances through the imposition of a destructive and asymmetric austerity on its  member countries that are in deficit. Overcoming the European crisis and rescuing the common currency require co-operation as equals, democracy, and, above all, the political and ideological defeat of adherence to the austerity doctrine.

The theoretical and ideological legitimacy of austerity policies in the past three years rests on an unstable base, without scientific foundation or empirical verification.  The recent admission on the part of a senior official in the International Monetary Fund that the organisation significantly underestimated the economic consequences of austerity and the revelation that the studies that constitute the basic arsenal of the followers of austerity turned out to be incorrect undoubtedly undermine the credibility of this doctrine. But austerity is a fundamental political option and its demolition requires defeat in the political field.

The strategic objective of the left coalition Syriza, of the parliamentary opposition, is that of contributing to the development of a substantive dialogue with all the progressive forces of the left in Europe to create together an effective line of resistence against the neoliberal elites and a positive approach for a way out that will allow the broadest alliance of popular forces. Especially in the countries of the south of Europe who confront great and common difficulties, a frank dialogue between progressive left forces and the broadest alliance of the peoples is an indispensiable condition for the widening of the political cracks in austerity, for exit from the recession and for the push ahead with reforms that will establish democracy, and co-operation as equals, in Europe.