Alexis Tsipras: «The Europe we want»

An article on New Europe magazine by Alexis Tsipras , the candidate for the European Commission Presidency, President of SYRIZA and leader of the Greek opposition 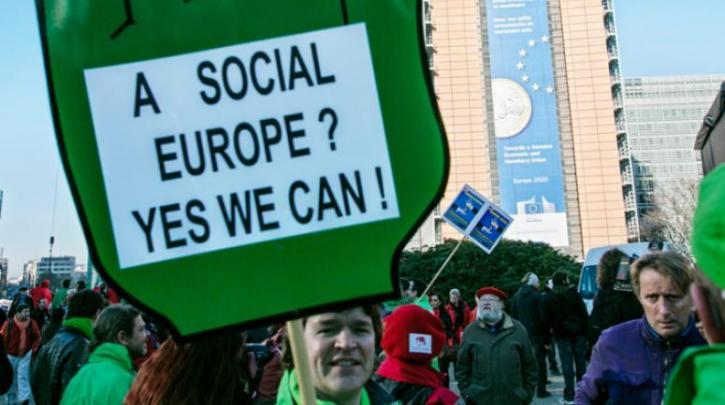 Greece - Athens - The continuing economic crisis has revealed both the inadequacies and the limits of the process of neoliberal European integration. It is an integration centered on financial liberalization and a monetary union, which is itself enveloped by a mere replica of the German Bundesbank under the title “European Central Bank”.  It is a recession-bias process that accentuates intra- and inter-member-state inequalities and asymmetries, adds to unemployment, and spreads the web of poverty to the lower social classes.  It has been more an avalanche of capital against labour than an honest endeavor to promptly resolve the crisis.

What has been actually happening is that the European political establishment saw into the crisis the opportunity to rewrite Europe’s postwar political economy. The political management of the Eurozone sovereign debt crisis is itself inscribed in the process of institutional transformation of the Eurozone South along the lines of Anglo-Saxon neoliberal capitalism. Diversity of national institutions is not tolerated. Policy-rule enforcement is the cornerstone of the European Commission’s recent legislation to enhance economic governance in the Eurozone. Chancellor Merkel in Germany, in alliance with a neoliberal bureaucratic elite in Brussels, treat social solidarity and human dignity as economic distortions and national sovereignty as a nuisance. Europe is forced to wear the straightjacket of austerity, discipline and deregulation.  Even worse, a generation of young people expects to be worse off than their parents.

We want the democratic and progressive reorientation of the European Union. Ending neoliberalism, austerity and the so-called European societies of two-thirds, where 1/3 of society behaves as if there were no economic crisis and 2/3 suffer every day, more and more. The European Left has the political vision and courage to build a wider social consensus on the programmatic goal to reconstruct Europe on a democratic, social and ecological basis.

This is the political context of my candidacy for the Presidency of the European Commission on behalf of the Party of the European Left. It explains why it is not just another candidacy.  It is, instead, a mandate for hope and change in Europe. It is a roll call to end austerity, safeguard Democracy and work for growth. It is a roll call to all the democratic and sensitive citizens in Europe, regardless of their ideology and political-party affiliation. Because, as recession, economic stagnation or anemic and jobless growth engulf the entire Eurozone, austerity also engulfs people both in the South and North. Hence, reaction to austerity transcends the nation-state and aligns social forces at the European level. Austerity harms the working people regardless of their address. For that reason, we need to integrate the indispensable anti-Memoranda alliance of the South into a broad, European anti-austerity movement. A movement for the democratic reconstruction of the monetary union.

The European Left is the main political force of change in Europe.

• We support the immediate repeal of the Memoranda and the coordinated reflation of all European economies.

• We want a genuine European Central Bank, acting as lender of last resort not only for banks but also for states.

• We believe that Europe needs its own Glass-Steagall Act in order to separate commercial and investment banking activities and prevent such a dangerous merge of risks into one uncontrolled entity.

• We are in the forefront of the fight against corruption of all forms. Our priority is to combat corporate corruption and enhance the ability of people and organisations to resist it. Corruption on the part of large companies, with their headquarters in large European countries, entails an economic and social cost for the people of those countries as well.

• We support the collective, credible and definite resolution of the Eurozone debt crisis through a European Debt Conference, predicated on the 1953 London Conference for Germany’s debt.

• We are working to dwindle fascism and Nazism in Europe, instead of dwindling democracy, as austerity does.

In place of a Europe that redistributes income to the rich and fear to the poor, we propose our own Europe of solidarity, economic and social security, employment and prosperity.